This website is dedicated to the role John Florio played in the writing of the works attributed to William Shakespeare, addressing whether Florio was their sole author or the master-poet of a workshop of writers, with the absolute exclusion of William Shakespeare, the Man from Stratford.

THE BARD AND SCIENCE

Concerning the Bard and the Science of his times, a great deal still needs to be discovered and understood. Unfortunately, most commentators so far have assumed that his occasional allusions to matters scientific were merely casual comments that an actor-playwright might make e.g. after overhearing conversations in some ale-house between people more knowledgeable than he was.

This kind of opinion, which starts out from the premise that the Bard was simply a man of the theatre, busy running the Globe on a daily basis, with little or no erudition and no real familiarity with the important scientific debates of his time is clearly in need of revision. As more and more facts emerge from a careful scrutiny of his writings, a very different picture builds up. In fact, the Bard turns out to know so much about the frontiers of Science in his own time that it becomes very complex to explain how such informed and such profound knowledge can possibly be reconciled with the official biography of a Stratfordian author with little schooling. Furthermore, the knowledge he displays is very precise, very different from what was publicly known at the time and points to a very specific social environment.

To understand this, it is important to recall the scientific context at the point in history when the plays were created. It is more complex than appears at first sight. The first and most important science of the time is Astronomy, which is widely held to be the key to understanding the Creation.

The official position (shared by Church authorities) is that celestial bodies (including the Sun) are attached to nested spheres which revolve around a fixed earth, as originally advanced by the great Egyptian astronomer Ptolemy. True, there is a controversial view, due to the Polish Monk Copernicus, that perhaps the planets may actually be moving on circular orbits (elliptical orbits were still unknown) with a fixed Sun at the centre. A first impression might be that the Bard, if he had more than a passing knowledge of Astronomy, would have to make his choice between the two options.

The real situation was much more subtle. In Denmark, the greatest observational astronomer of the day, Tycho Brahe, was performing extremely detailed and accurate measurements of the night sky, amongst the most reliable and complete ever made. They were to stand as the best astronomical data available for several centuries. It was already clear to him that the simple Copernican theory (with circular orbits) did not fit the data. Philosophically, he was attracted to the simplicity of Copernican orbits, but he had difficulty with the notion that the Earth might itself be moving. The Theologians of the time also had a problem with the concept of a moving Earth, although nothing in the Holy Books was contrary to the idea. Nonetheless, the Church took a stand on the issue and it was recognised as a dangerous area for philosophers and scientists alike. The Italian thinker Giordano Bruno was condemned to death and burned at the stake in Rome precisely for having written in favour of the Copernican model.

Tycho understood what the Church did not like about the Copernican view (he probably shared the widespread misgivings about a moving Earth) and this led him to develop yet a third model (neither Ptolemaic nor Copernican) incorporating features from both systems. This ‘third way’ is called the Tychonian universe and lasted only for a rather short time, from the moment when Tycho proposed it (in 1570) until one of Tycho’s associates (Johannes Kepler) came out with his theory of elliptical orbits (between 1609 and 1619) which brought definite agreement between theory and observations within the Copernican scheme.

Thus, there were not two, but actually three theories to choose from at the time when the plays of the Bard were written. Two of them were very well-known: the geocentric theory of Ptolemy (the Earth at the centre) and the heliocentric theory of Copernicus (the Sun at the centre). The third theory was the geo-helio-centric theory of Tycho Brahe which lasted only for a few years, but these happen to be exactly the years when the Bard was writing. Why is it called “geo-helio-centric”? In Tycho’s model, the Earth is fixed, like in the geo-centric model, with the Sun rotating around it. However, the Planets (other than, of course, the Earth) now move on spheres around the Sun, as they would in the Copernican (heliocentric) system. The Tychonian model did not last long enough to attract the world’s attention and was soon swept away. So, it has pretty well disappeared from the books about the history of Science.

If we reserve the name ‘Planet’ for celestial objects moving on circular orbits, then, clearly, in Tycho’s model, the Sun becomes a ‘Planet’. Indeed, it becomes the Prime Planet, the first one, in that it imposes order on all the others as it guides them togeher on much more complex motions through the sky, producing order out of apparent chaos.

Tycho’s model has both Ptolemaic and Copernican features. This makes it more complex to handle, but incorporates many desirable aspects (including the ability to account for the phases of the planet Venus, which is not possible in the Ptolemaic framework). As Tycho had anticipated, his vision of the Universe was much more attractive to the Church and was soon accepted. When the Jesuit Priest Matteo Ricci predicted a solar eclipse in 1596 in China, he made use of the Tychonian model which was accepted by the Vatican’s hierarchy. In fact, very accurate calculations were possible within this model if one included epicycles.

Thus, the Third Path was far less dangerous to follow than the Copernican view. It was much, much safer. After the death of Bruno, this became pretty clear.

It so happens that Giordano Bruno spent two years of his life in London, as a host of the French Ambassador, who provided him with a place to work while he wrote the essays concerning the Copernican theory of the Universe. These were the very essays used against him in evidence when he was condemned to the Stake by the Inquisition in Rome. Thus, all the people whom Bruno met and worked with in London became acutely aware of the dangers surrounding helio-centrism.

A person he worked with, and who was also a fluent Italian speaker was John Florio. It is established that Florio was working as a spy in the French Embassy, in the service of Sir Francis Walsingham. Florio and Bruno became great friends and Florio certainly learned a lot from Bruno, who had detailed knowledge of Astronomy.

Regarding Tycho, It is likely that Florio met some of the representatives of an official delegation of the Danish Monarchy to the Court of England in 1592. This delegation included two inseparable cousins, Frederick Rosencrantz and Knud Gyldenstierne who were both also cousins of Tycho Brahe. Both had studied at the University of Wittenberg. The connection to the two characters in Hamlet is obvious.

We also have another route connecting Tycho Brahe to John Florio. Florio was a very brilliant scholar. He was admitted to Magdalen College Oxford and his excellence in languages was such that he subsequently held a Fellowship and taught there. We also know that Tycho Brahe wrote a letter to Thomas Saville, a great Latin scholar and one of the founders of Merton College, asking him to look for a prominent English poet to celebrate him in verse. Tycho, who was himself a Latin poet of distinction and knew Saville personally for this reason, promised that any resulting English poetry would be published alongside his great treatise on Astronomy. The correspondence exists in the University Library.

What makes the story significant is that Tycho’s letter contained several copies of an engraved portrait of the Astronomer with coats of arms of his family relatives worked into an impressive frame around the picture of himself. Tycho clearly intended them to be used as introduction and to inspire the poets. In this engraving, Tycho Brahe is surrounded by the crests of his noble ancestors, with his own paternal arms at the top. The names, going around clockwise from the bottom right corner names read:  Gyldenstern (Gyldenstierne), Kahbiller (Kabel), Markeman (Markmand), Axellsønner, Rosenkrans (Rosenkrantz), Longer (Lunge), Ruder (Rud), Braher (Brahe), Biller (Bille), Ulfstander (Ulfstand), Ronnor (Rønnow), Troller (Trolle), Longer (Lunge), Rosenspar, Storawase, and Axellsønner.  Thus, the names of the two characters (the ‘villains’ in Hamlet) appear again in this frame.

There is little doubt that Saville, casting around for prominent British Poets, would naturally have contacted John Florio, who already had some renown as a poet and author and who, furthermore, had connections on the literary scene, both in London and at the Royal Court.

Thus, Florio (the man from Fulham) emerges as a central figure, with all the right contacts and connections. With his knowledge of Latin and his correspondents in Italy, he was surely one of the first persons in London to be aware of Galileo’s discovery of the four moons of Jupiter… It is much more difficult to make such a case for the man from Stratford. 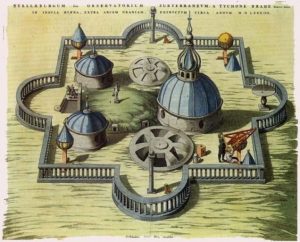 To these facts, we can add numerous references to Astronomy in the plays of the Bard. To pick out just one of the most relevant, we have the description given by the wisest of the Greeks (Ulysses) in Troilus and Cressida:

And therefore is the glorious planet Sol
In noble eminence enthroned and sphered
Amidst the other; whose medicinable eye
Corrects the ill aspects of planets evil…

Here, we see the Sun as a ‘Planet’ and that the Sun itself is ‘sphered’ within the other planets. Being at their centre, the Sun is the ‘noblest’ of the planets. Should they be tempted to wander off their course, the Sun’s ‘medicinable eye’ corrects their motion immediately and keeps them on the ‘right’ path (avoiding the chaos of evil).

This passage would make absolutely no sense without reference to the Tychonian model. So, we can safely conclude that the Bard espoused Tycho’s model, the safest option for a person who must have been all too aware of Giordano Bruno’s fate. Moreover, he must be one of the only known poets who adhered to this theory. Another one is probably John Florio, because the very words ‘Planet Sol’ also appear in his dictionary The Worlde of Words, although the connection to Tycho Brahe’s ideas is less manifest here.

Reference to the four Moons of Jupiter can be found in Cymbeline, Act V, where Posthumus receives the visit of Jupiter in prison, while four ghosts dance in circles around him. The play is dated 1611, the very year in which Galileo published hi discovery in the book Sidereus Nuncius. Clearly, the Bard was exceptionally well-informed.

So, Science does point to a very strong connection between the Bard and John Florio.

Stars and Comets in Shakespeare